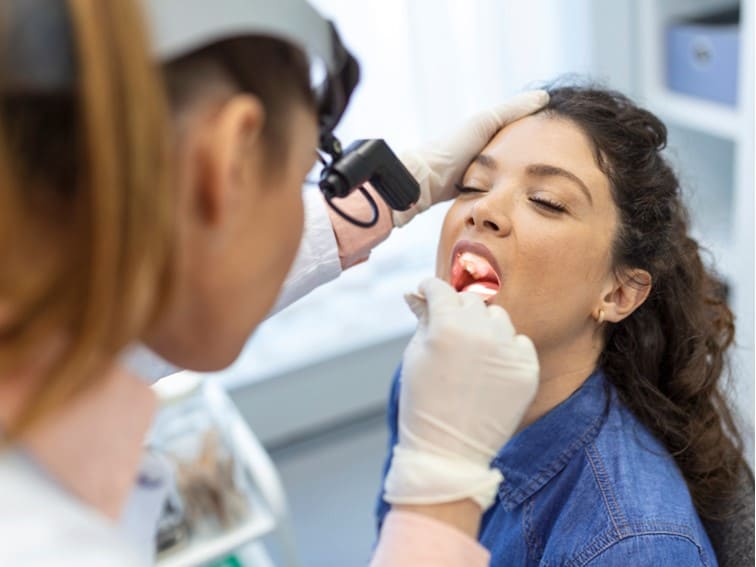 After tonsillectomy, it is usually common to find a white slough inside the throat on either side where tonsils used to be present. When you examine your child and find such slough, then it is not to be worried about and should be considered as just a normal healing process. The slough may be seen for a few weeks following the surgery. Even the uvula (flap) – the tissue that is seen dangling at the back of the throat looks inflamed – swollen and bruised, which will settle down over a period of time. The other findings may include the yellowish appearance of the inflamed area, which is surrounded by red edges with some smell – which is nothing to be worried about.

Earache and throat pain may be experienced by the patient after tonsillectomy. Pain in the ear may be due to the pain brought up by the throat to the ears. Following tonsillectomy, particularly after the first three to four days, the throat pain may become worst and may be slightly severe for up to 10 days after the procedure – especially in adults, and then gradually settles down day by day.

How do we overcome pain following the removal of tonsils?

Pain associated with tonsils or the pain following the removal of tonsils can be alleviated or relieved by taking ibuprofen or paracetamol kind of medications including Diclomol, Crocin, and ibuprofen. Follow the instructions of your doctor regarding the dosage and frequency of usage as these medicines are capable of causing potential damage to your liver in case of dosages. In general paracetamol, overdosage is very serious and may cause liver injury and liver failure as well. These medicines can even pose threat to your kidneys as well.

A soft diet is good following tonsillectomy and it is recommended for at least a week.  During this time fluid intake is encouraged. The soft diet includes khichdi, Upma, Yoghurt, soft sandwiches, scrambled eggs, soft Idli, soft fruits, and ice cream. Salty, dried, and sharp food stuff is not recommended and it should be avoided. Even foods that require excessive chewing such as firm meat should also be avoided. Hot drinks are not permitted, but lukewarm beverages and drinks are permitted.

Avoid hard foods like dry chips, salty processed foods, and dry toasts. Usage of honey which is warm, but not hot is helpful in soothing the inside of the throat and back of the throat following the removal of tonsils. If the patient is a child, he or she should get enough fluids and calories during the early operative period – and if the child is tolerating soft ice cream, yogurt, and water following tonsillectomy, then it is fine as long as the child is meeting the fluid and calorific requirement.

Rarely a child may dehydrate because they refuse to drink enough following the surgery. Often, they may tolerate an icy Pole and this is the first thing usually given to them after the surgery and could be tried. If you are concerned regarding a lack of fluid intake, let me know as very rarely a child may need to be readmitted to a hospital and placed on an intravenous drip.

The risk of bleeding following tonsillectomy or adenoidectomy is there; therefore, for many patients, it is something to be a major cause for concern. However, following the removal of adenoids the risk of bleeding is very low. There could be a possibility of a small amount or streaks of blood with mucus – which should not be taken as seriously. But, if the patient spits blood, which is bright red and the quantity is somewhat more than usual and if this happens within or up to two weeks of surgery, then they must be taken to the nearest emergency department.

For up to a week after the removal of the tonsils, it is better for the patient to take rest at home and be at ease.  After 2 weeks, vigorous activity such as sport can be commenced.

For adenoidectomy alone, there are no restrictions on dietary intake. The risk of bleeding following the removal of adenoids alone is very small and generally, children can be kept at home for up to three days, and then are allowed to go back to school, preschool, or daycare. Occasionally, after the removal of adenoids, which is after 5 to 7 days of surgery, a child may develop bad breath – which may persist for a few days. This is a part of the normal healing response and should not be of any particular concern to the parents.

Routinely an ENT specialist sees patients one week after the removal of tonsils or adenoids; and usually, this appointment is arranged for the patient at the time of their discharge.

If you have any additional questions are concerns following tonsillectomy and adenotonsillectomy, then feel free to contact, e-mail, or call us.