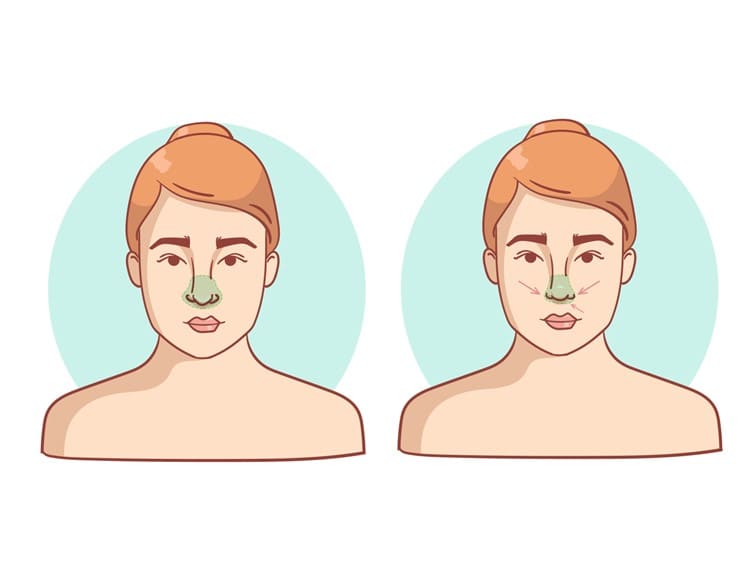 Care After Septoplasty and Turbinoplasty

Taking care of nose after septoplasty

As with any other surgical procedure, it is common to have a feeling of unease after septoplasty or turbinoplasty surgery; therefore, for the patient, it is common to stay in the hospital for one night. The patient is placed on intravenous antibiotics that night after the surgery and might feel uneasy or uncomfortable due to the placement of a nasal pack on either side of the nose.

The placement of the nasal pack causes blockage of the nose – owing to which, the patient will have to breathe through the mouth. However, the nasal packs are removed a couple of hours before the planned discharge – which might be around 24 hours after the nose surgery. The removal process could be uncomfortable for some patients, but the patient is made comfortable. Prior to discharge, the patient is seen and the case is reviewed by the doctor.

Depending on the nature of the activities or job work the patient is accustomed to doing, the recovery and returning to work period may vary following nasal surgery.

The usage of an endotracheal tube by the anesthesiologist during the surgery may cause sore throat for a few days after the surgery – which is common following the surgery; therefore, it should not be a cause for concern for the patient.

It is common to have a congested nose for up to a week following the surgery; however, with the systematic douching of the nose, the congestion will ease. In this regard, Dr. Neetu Modgil will give the necessary instructions at the time of discharge. The patient is instructed to be on oral antibiotics for up to five days following the surgery.

Use of Decongestants and Sprays

The other prescriptions may include nasal decongestants and nasal wash or douche if the patient has undergone a septoplasty operation. Such prescriptions are available at a local chemist. The patient is instructed to use them three to four times a day for up to 10 days.

Small sutures are used inside the nose in a septoplasty surgery; they will dissolve on their own. Nasal saline spray is prescribed to the patient. One such spray is FESS spray – which is available as over-the-counter medicine at any chemist shop. The patient is advised to use this spray as frequently as they are willing to use it – but it is better to use sprays according to the instructions of your doctor.

The patient may feel congestion of the nose or blocked nose for a couple of weeks – which is normal after the surgery. Crusting and bloodstained mucus discharge from the nose may also be noticed.

The top lip may feel numb for a few days – and therefore, it is useful to sleep a little head up for the first week or so after surgery by putting the head on a couple of pillows.

Taking care of nose after septoplasty

The patient should take utmost care and precautions; and therefore, must not blow their nose for up to two weeks following the surgery. In addition, the patient is also advised not to lift heavy objects and avoid activities that involve moving and lifting heavy items or indulge in exercise for up to two weeks. The post-operative appointment may commence after the first week of surgery and during the consultation, the doctor will examine the nose and if deems necessary would clean the nose. Up on the advice of the doctor, the patient can resume blowing the nose thereafter – if they need to do so.

The main cause for concern following the surgery is bleeding which can happen any time after the surgery during the first two weeks in particular. The bleeding might get aggravated by exercise or heavy activities, such as lifting, and by activities that put pressure on the face. In such cases aspirin must be avoided as it may induce bleeding – instead, ibuprofen and paracetamol may be prescribed.

How to stop a nosebleed?

If the patient gets a nosebleed, they should stop the work they are doing and sit up in the chair. Keep the head in a slightly forward direction and do not tilt it. Tilting the head may cause the blood to flow through the throat into the stomach and prompt vomiting – which could make the condition worst. If any blood gathers in the mouth, spit it out rather than swallowing it. Gently place an ice bag or cool compress over the bridge of the nose to cool the area.

Use of Nasal Spray

Cooling the nose and surrounding areas like cheeks will help constrict the blood vessels and help stop bleeding. Press the soft part of the nose gently by your forefinger and thumb with tissues under. This should stop the bleeding. If bleeding does not stop, then spray a medicated nasal spray, such as Otrivin once on each side of the nose; this may help stop the nosebleed. When bleeding stops, don’t start doing strenuous activities and try to avoid such activities as much as possible. Thereafter, use Otrivin nasal spray once in each nostril every eight hours for up to three days. In spite of all these measures if the bleeding persists and becomes extreme, then the patient should be taken to the emergency department. Emergency physicians will contact Dr. Neetu Modgil for further course of action.