Chronically infected, enlarged and swollen adenoids are removed by adenoidectomy. The surgery is mostly done for small children between ages one and seven years. In grown-up children and teenagers, adenoids shrink on its own and gradually disappear. Adenoids, if present in adults are considered vestigial.

Enlarged or swollen adenoids can cause breathing problems in children by blocking their nasal passages and airways. They even lead to ear infections and other complications – which would eventually lead to recurrent snoring and obstructive sleep apnea. 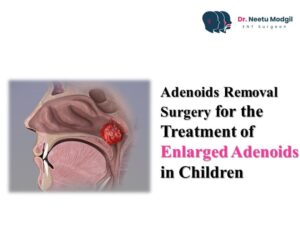 Adenoids are a pair of glands located above the roof of the mouth. The surgery to remove adenoids is known as adenoidectomy.

Adenoids are small glands or lumps of tissue located above the roof of the mouth. They perform certain essential functions in young children. Adenoids usually protect children’s body from bacteria and viruses as they are an essential part of the immune system. Adenoids are almost absent in teenagers as they gradually begin to shrink around age 5 to 7 years. However, adenoids if present in adults is usually considered as vestigial.

In children, though adenoids provide protective function, they tend to become chronically infected, swollen and enlarge. This could be due to allergies, infections or maybe other reasons. In some children, adenoids are abnormally large by birth.

What are the Symptoms of Enlarged Adenoids?

The symptoms associated with enlarged adenoids are mostly due to blocked airways and include the following:

ENLARGED ADENOIDS-Recurrent throat infections cause adenoids to enlarge; this leads to blockage of eustachian tubes.

Surgery to remove the glands (Adenoidectomy) is often needed. Removing them has not been shown to affect a child’s ability to fight infections.

How to Prepare for the Surgery

Preoperative blood tests will help your doctor ensure that there won’t be excessive bleeding during and after the procedure.

During a week before the surgery, avoid any medication that can affect blood clotting, such as ibuprofen or aspirin. You may use acetaminophen (Tylenol) for pain. If you’re in doubt about which medications should be appropriate to use, talk to your doctor.

The day before the surgery, you shouldn’t eat or drink after midnight, not even water.

The surgeon will perform Adenoidectomy under general anaesthesia.

The procedure is usually performed on an outpatient basis, which means the patient can go home on the same day of surgery. After the surgery, you will be sent to a recovery room until anaesthesia is gone.

The doctor will prescribe medication to reduce pain and swelling. You will be discharged on the same day of the surgery.

Complete recovery from an Adenoidectomy usually takes one to two weeks. Sore throat for a week after surgery is normal.

Drink a lot of water and stay hydrated.