What is a Thornwaldt cyst?

Thornwaldt cyst is a benign (non-cancerous), rare (incidence rate of less than 1 to 3%) nasopharyngeal cyst. It remains as a remnant of the embryonal notochord superficial to the posterior constrictor muscle of the pharynx (midline of the nasopharynx). Owing to its small size, it is incidentally detected in routine MRI scans. In the majority of the cases, it doesn’t cause any symptoms. Mostly it is located in the posterior wall of the nasopharynx. It is a common finding in men compared to women. 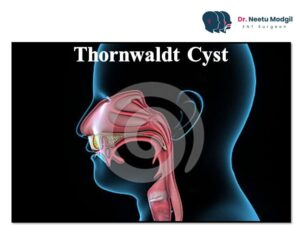 During embryonic development (10 week of embryonic development), thornwaldt cysts are formed due to the retraction of the notochord – which comes in contact with the primitive pharynx’s endoderm. The cyst accumulates fluid and is lined by respiratory epithelium. The obstruction due to cyst may cause inflammation.

What are the Causes of Thornwaldt cyst?

Can Thornwaldt cyst cause symptoms?

Thornwaldt cyst symptoms: This condition is almost always asymptomatic. Infection of the cyst can cause bad breath (halitosis) or periodic discharge of foul-tasting fluid into the mouth. In some cases, obstruction of the eustachian tube can cause otitis media.

What are the other symptoms of Thornwaldt cyst?

Can thornwaldt’s cyst cause migraines?

Thornwaldt cyst doesn’t cause migraines or headaches in general. Occipital headache is a rare occurrence associated with Thornwaldt cyst.

Can Thornwaldt cyst cause tinnitus?

How is a Thornwaldts cyst Diagnosed?

Nasal endoscopy during routine ENT examination can detect Thornwaldt cyst. ENT doctor passes a flexible tube called nasopharyngosocpe through the nose to closely view the cyst and then confirms the diagnosis with the help of a CT scan or MRI.

Thornwaldt cyst Radiology: Thornwaldt cyst has a characteristic appearance with well-circumscribed rounded lesions ranging in size from a few millimetres to a few centimetres in diameter.

Thronwaldt cyst size: It is typically between 2-10 mm in size.

Thronwaldt cyst MRI: MRI Scan of the nasopharynx is the best imaging technique for the detection of Thornwaldt cyst. MRI scans can detect the cyst’s size, contents, and anatomy in detail. MRI demonstrates these cysts as being well-circumscribed with a thin wall.

What is the Treatment for Thornwaldts cysts?

Small Thornwaldt cyst can be left untreated if it doesn’t cause any problem. If an ENT specialist deems treatment as necessary, then he performs thornwaldt cyst surgery [marsupialization (de-roofing the cyst)] mostly through a transnasal approach.

Thornwaldt Cyst Surgery: A Large Thornwaldt cyst closer to the Eustachian tube causing an obstruction requires surgery. An experienced ENT surgeon performs the surgery using an endoscope. The surgery involves marsupialization of the cyst and it is performed under general anaesthesia.

What to Expect after Thornwaldt cyst Surgery?