Loss of blood from the nose from the small blood vessels that line the tissue inside of your nose. Epistaxis or nosebleeds are common. A majority of people have at least one nosebleed during some point in their life. In the tissue lining the nose, blood vessels are fragile, they bleed easily. The centre position of the nose in the face and the presence of a large number of blood vessels, make it prone to bleed easily. The nose is an easy target for injury or trauma – that’s why it bleeds easily. 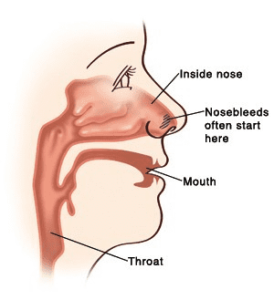 There are many causes of nosebleed – dry air is the most common though. This can be seen in hot low-humid climate. Usually, the tissues lining the nasal membrane dry out in the hot and dry environment and by the use of a central heating system. The dryness causes itching and irritation. If the nose is picked or scratched – it bleeds.

The other common nosebleed causes include the following:

A sudden blow, a punch in the face, a car accident or a sudden fall can cause a nosebleed. Nosebleeds following an injury may indicate internal bleeding, skull fracture or a broken nose. You should seek immediate medical attention if you experience nosebleed longer than usual.

Depending on the type and cause of the nosebleed, treatment will vary. An anterior nosebleed can be treated at home by applying cold press over the bridge of your nose or by using a nasal spray.

To stop a persistent or frequent nosebleed, a medical technique called cauterization can be used depending on the condition. In this type of treatment, an ENT doctor burns the blood vessels in your nose with silver nitrate or a cautery (Electric radiation to heat the object) to remove tissue.

If you think that you could be having a posterior nosebleed or if you can’t stop bleeding from anterior nosebleed, which could also be a serious problem, then contact us immediately.

If you are unsure about the type of nosebleed you have or when you see that your nosebleed is lasting longer than usual – maybe for around 20 minutes or more or if it occurs after an injury, then seek an immediate appointment with an ENT Specialist. It could be a posterior nosebleed.

READ MORE – How to Stop Nosebleeds?