Foreign Body in the Nose

Any foreign object in the nose which is not supposed to be there is a foreign body in the nose. Small children under five years of age commonly have this issue, but it is naturally uncommon for grown-up children and teenagers to have foreign objects in their nose.

Natural curiosity and impulsive nature make children become curious and explore the things and objects around them. They express their curiosity by asking questions and exploring the world around. 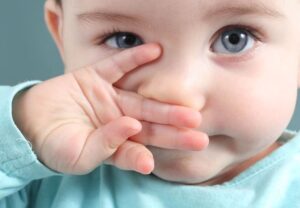 To a certain extent, it’s alright to have this instinctive behaviour, but it may sometimes become dangerous as children tend to put foreign objects in their ears, nose and mouth. The risk associated with this act is choking hazard and serious injuries. Even if it seems to be harmless the risk of serious injuries and infections is always there.

This is a list of some of the common objects that children commonly put in their nostrils – food, clay, dirty particles, tissue papers, pieces of eraser, small toys, pebbles. Children put any of these objects into their noses copying other children or out of curiosity. There is also a possibility of foreign objects entering into the nose while smelling or sniffing an object or during sleep.

Button batteries are a bit worrisome because if they get inside the risk of serious injury to the nasal passage increases manifold. Even if it remains inside for 3 to 4 hours the damage it causes could increase several times.

Signs and Symptoms of a Foreign body in the nose

When you suspect that your child has put something in his or her nose and look up their nose, you may not be able to see it properly. The signs and symptoms of a foreign object in the nose may include:

Nasal discharge – it could just be a clear liquid, mucus, pus, bloody, grey and greenish as well. Irrespective of the colour and nature of the drainage, if you smell a bad odour, then it could be a sign of infection.

Choking sensation seems to be gasping for air or breathing difficulty through the chocked nostril.

The best measure you must take is to remain calm – and don’t be very anxious as this may trigger a panic reaction in your child as well.

Diagnosing a foreign body in the nose

If you suspect that something has gone inside your child’s nostrils – which you cannot see properly or completely – then make an appointment with an ENT specialist doctor. The doctor will see your child and make him or her lay back to examine the nose thoroughly with a very special portable lighted instrument. The doctor collects a nasal sample (Swab) and sends it for a test to detect bacterial infection.

Here are some of the methods for removing the object

Make your child comfortable while the best treatment for this condition is only the removal of foreign object from the nostril. All that you have to do is ask your child to gently blow his nose – which will help in removing the object. This is what is needed most.

Use a tweezer to remove any foreign object which can be possibly removed with it – but be careful with smaller objects as they might get pushed further deep insight. Tweezer is helpful for removing larger objects.

Don’t use cotton swabs or fingers to remove objects stuck in the nose. These acts can push the object farther deep inside. Encourage your child to breathe through the mouth until the object is being removed from the nostrils.

Visit an ENT Specialist immediately if you are unable to remove or see the object. The doctor will remove the object by using different methods and techniques.

The process of removing the foreign object make your child more comfortable. The ENT doctor might give a topical anaesthetic to numb the nose

The doctor may also prescribe antibiotics or nasal drop to prevent or treat an infection.